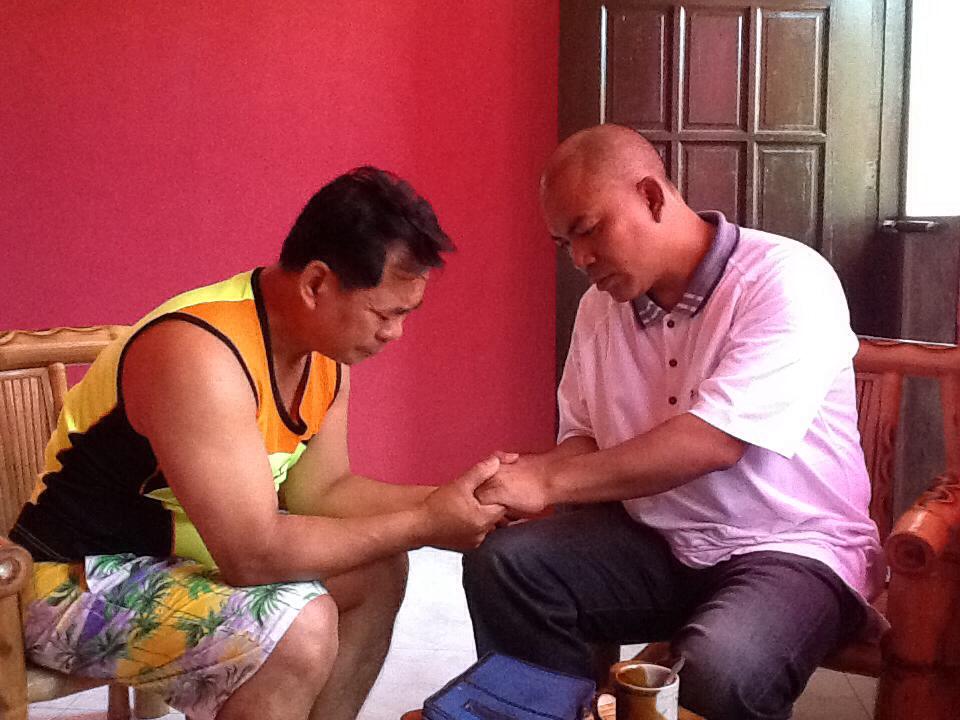 Click May 2014 to read about Brent and Kim’s trip to the Philippines in April. Brent visited the areas hit by the typhoon in November.

April 9 – 8 a.m. Arrived in Tacloban City, Philippines with Rev. Roehl Rivera, President of Faith Evangelical Church of the Philippines, and Rev. Mar Ocampo, FECP’s National church planting director. Got a taxi at what was left of the airport and went to visit the relief and restoration team, Pastor Willy and Vicky Galzote, in their home. Along the way, we could see some destruction as well as signs of rebuilding. The trees had begun to re-grow their leaves. At 10:00, a man knocked on the door. His name was Dennis. He was one of the first contacts made by the team in Tacloban City. He is the leader of a community called Purok 6 hit hard by the typhoon last November 8. With funds from OMS and our church in Charlotte the team is coordinating a re-roofing project for more than 100 homes in the community. Dennis had been a very religious person, but never knew Jesus. Pastor Willy had led him to Christ just two weeks before and the difference in his life was amazing. He visits Pastor Willy every day to talk, study the Bible together, and pray.

4 p.m. We took a tricycle (motorcycle with a sidecar) to the Purok 6 area where Dennis lives. We went first to Dennis’ house, and then visited several homes that had received corrugated iron sheets for roofing. The people were so happy and appreciative. Pastor Willy told us that they had the people paint the roofs red so they would know which ones had received the roofing material.

Overlooking Purok 6 with the new red roofs in the background.

April 10 – 2 p.m. Took a jeepney (public transportation) to the town of Tanauan, about 15 miles south of Tacloban. Tanauan was hit by the eye of the storm and the damage was much more severe here. The destruction here was caused by a double-whammy: the storm surge, in some areas as high as 30 feet, and the extreme high winds, which were the strongest to ever hit land on earth. This was the area where the relatives of Tess Marcelino, a member of Faith Fellowship church back in Manila about whom our last prayer letter told live. We met a man named Rudy, her uncle. They lived on the west side of the national highway, farther from the ocean. The water on this side of the road was about 10 feet high during the storm, but there were very high waves. Rudy and several members of his family took refuge in the back part of their cement block house. During the storm, their roof blew away, and some of the walls of the house caved in. All of his family was saved, but many people in neighboring areas lost their lives. When we arrived, they had rebuilt some, but we could still see the leaning walls and smell death.

After visiting Rudy and hearing his story, we went to the east side of the road where other family members lived. This area was much closer to the ocean and suffered much higher levels of destruction. No rebuilding was happening here because so many people lost their lives. The dead don’t rebuild. We met a cousin of Tess’ named Eduardo. He told how when the storm hit he was separated from his wife and two of his children. He had the other two youngest ones with him, clinging tightly around his neck. In this area, however, the water was about 20 feet high. His house and hundreds of others were totally washed away. His wife, and all four children passed away in the storm. The two he had with him drowned while hanging on to him. He was one of the few survivors in this area. We all cried as we heard his story. Pastor Willy will return and help get a rebuilding project going, as well as a livelihood project so Eduardo and others like him will be able to have hope.

Thank you to everyone who gave and made this trip possible! Brent’s visit greatly encouraged the team, and he was able to give ideas on how to run the projects so the most number of people will benefit, and the funds will be best used. I was so encouraged too at the response of the people to the ministry of the team. In spite of all the death and destruction, God is moving in powerful ways. Already, Pastor Willy has about 30 people meeting every week in Tacloban for Bible study and prayer! This will be the nucleus of a new church! We anticipate the same thing happening in Tanauan very soon. Keep praying for the team, for ongoing relief efforts, and for God to open doors for people to hear the Good News of Jesus!

Kim was also able to go to the Philippines. Though she did not go to Tacloban and Tanauan, she spoke to over 150 women at Faith Fellowship church for their women’s conference. Several came to Christ as a result! Your gifts and prayers made a difference!! Kim will be leading a team of women back to the Philippines in July. Our daughters, Devri and Danya will also be going. Keep them in your prayers.

We praise the Lord that we had the opportunity to visit and minister to the Filipino people. God is doing amazing things there and we are privileged to be a part of it. Brent will be going back in September to visit Tacloban and Tanauan again, and to continue encouraging the Filipino people in their maturing ministries!