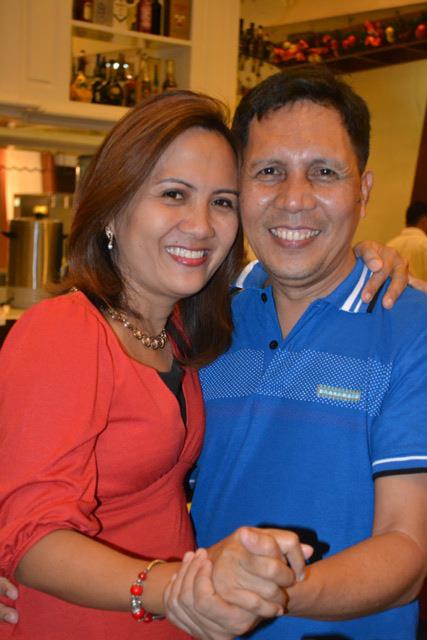 Pastor William and his wife.

Pastor William in the Philippines was heartbroken. He was so sick that he could not attend the church planting training he had been looking forward to last August. He had come down with Dengue fever, a sickness passed through mosquitos, just before the training. He had rashes on his body, a high fever, and his blood platelets were very low. So low, in fact, that he had to get four bags of blood to survive! As he lay in the hospital he asked God why this had to happen. The training was important so more people could be reached for Christ in his town of San Carlos. He didn’t understand, but he trusted the Lord would somehow use this sickness to bring good.

When he got out of the hospital, he asked the doctor for the names of those who had been so kind as to donate blood for him. The doctor had to pull a few strings, but was finally able to give him the names. Pastor William wanted to visit them and thank them for helping him stay alive. As he visited the people, they were amazed to hear Pastor William’s story. He was also able to tell them about Jesus’ love and forgiveness through his shed blood on the cross. The four people agreed to get together for an evangelistic Bible study! What Pastor William thought was a disappointment, God used to start a new group of believers! Next time you get sick, maybe God can use it to bring someone to him!

It is amazing the stories you hear when you visit countries and listen! I met another man in India that I want to tell you about next.

I met Amos in Bangalore  last week. I attended a church planting training conference for leaders all over Asia. Amos was a delegate from a city in India that had a horrible industrial accident a number of years ago when thousands were killed. He had lost some family members in that tragedy. He was now a leader of a ministry in that city that reaches out to people of other faiths. Amos shared how he had written a curriculum that can be used in the religious schools of the other faith to teach Bible stories. There has been great response as the children hear the Word of God! There have even been some who have converted and now no longer worship false gods, but the one true God! Amos then shared about what he does every Christmas Eve. He invites all the people from the local community to come to a place and hear the Christmas story. Local religious leaders are also invited and given a chance to share what their holy book says about Jesus. Then, Amos reads the story of Jesus’ birth from the Bible and preaches about Jesus to the people! They all listen carefully because their leaders are there and have already spoken. Many people hear the truth about Jesus for the first time on that night. God is making a difference through Amos and many house churches are being planted in his city through him!

I was blessed to encounter these men on my recent travels. God is moving in Asia and all around the world. It is a joy to be a part of ministering to and serving with people like William and Amos. Please keep them in your prayers, and us too. We need additional financial support so we can continue to serve. You can give online here. Thank you for your prayers!